How much lag does an Attitude Indicator experience?

How much lag does an Attitude Indicator exhibit when it is working as designed? Other than well-known problems like tumbling beyond certain limits in pitch and roll, and precession errors from the erecting system, does a gyroscopic AI experience lag that makes it unusable for turbulent or gusty conditions?

Similarly, are there any conditions that would cause an AHRS-based AI to exhibit lag or otherwise show an incorrect indication of the horizon relative to the aircraft?

(Inspired by comments on this answer)

There is no virtually no lag on attitude indicators. The traditional ones are based on a mechanical gyroscope. Due to the gyroscope being gimbaled, it remains in a fixed attitude. 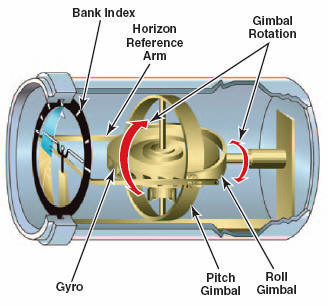 The modern attitude indicator in a glass cockpit gets the attitude information from the Attitude and heading reference system (AHRS). There is of course some lag associated with digital data transfer and display refresh rate, but these effects are too tiny to be noticeable by humans.

The first generation of these systems used mechanical gyroscopes as well. Nowadays most AHRSs uses Ring Laser Gyros or Fibre Optic Gyros. These gyroscopes use relativistic effects of light travelling clockwise and counter-clockwise through a circular path. The accuracy of these systems is very high and there is no delay.

Another technology that is used is are Micro-electromechanical Systems (MEMS) gyroscopes. The are based on a vibrating structure. The direction of a vibration tends to remain in the original direction, even though the supporting structure rotates. MEMS are relatively cheap compared to RLG and FOG but they are less accurate. Due to developments in the automotive and mobile telephony industry where attitude sensors are used for various applications the accuracy of MEMS gyroscopes has improved while their costs have decreased. This makes them now interesting for application in avionics.

Talking about vacuum-driven gyros, which are what I'm mainly familiar with: When everything is working as designed (sufficient air pressure for normal gyro rotor speed, moderate maneuvers) there is some lag.
You'll notice it if you're looking for it, but the "1-2 seconds" mentioned in the linked answer seems on the high side (at least based on what I've seen in light aircraft).

Vacuum-driven attitude indicators lag because of the way they operate: Basically a set of vanes are always trying to pull the gyro upright relative to gravity, and the inertia in those vanes and the air flow induces a slight lag before the rotor (and visual indicator) moves.

That's not the only error in your trusty attitude indicator. Stealing liberally from an old edition of the IFR Handbook for the rest of gory details details:

…
Another group of errors, associated with the design and operating principles of the attitude indicator, are induced during normal operation of the instrument. A skidding turn moves the pendulous vanes from their vertical position, precessing the gyro toward the inside of the turn. After return of the aircraft to straight-and-level, coordinated flight, the miniature aircraft shows a turn in the direction opposite the skid. During a normal turn, movement of the vanes by centrifugal force causes precession of the gyro toward the inside of the turn.

Errors in both pitch and bank indications occur during normal coordinated turns. These errors are caused by the movement of the pendulous vanes by centrifugal force, resulting in the precession of the gyro toward the inside of the turn. The error is greatest in a 180° steep turn. If, for example, a 180° steep turn is made to the right and the aircraft is rolled out to straight-and-level flight by visual references, the miniature aircraft will show a slight climb and turn to the left. This precession error, normally 3° to 5°, is quickly corrected by the erecting mechanism. At the end of a 360° turn, the precession induced during the first 180° is cancelled out by precession in the opposite direction during the second 180° of turn. The slight precession errors induced during the roll-out are corrected immediately by pendulous vane action.

Acceleration and deceleration also induce precession errors, depending upon the amount and extent of the force applied. During acceleration the horizon bar moves down, indicating a climb. Control applied to correct this indication will result in a pitch attitude lower than the instrument shows. The opposite error results from deceleration. Other errors, such as "transport precession" and "apparent precession," relate to rotation of the earth and are of importance to pilots and navigators concerned with high speed and long-range flight.

A more common cause of a (noticeable) gyro lag is low vacuum, which results in low rotor speed and makes the entire instrument sluggish.
High vacuum can cause the opposite effect - excessive rotor speed, and "overshoot" in maneuvers.

You can find more of the old IFR handbook over on pilotfriend.com. "IFR Exam-o-Gram #24" available here is also a good read - both of these are from the days when the FAA expected pilots to cram pretty extensive systems knowledge into their brains.

The gyro vanes picture above is out of the Airframe mechanic's handbook - AC 65-15A which is actually still current.

All traditional instruments have a certain amount of lag. This is one of the factors that complicates flight automation. Certain advanced instruments such as inertial measurement units and ring laser gyroscopes have no lag.

You can find details on the typical lag and other issues with the artificial horizon ("attitude indicator") in any instrument flying textbook, or web site, such as this one. Any prolonged non-level flight will produce an error in the AI, and for this reason IFR holding patterns have a one-minute level flight leg after each minute of turn. This extra travel distance gives the AI the time to return to normal.

20
If I fly a balanced turn long enough, will the AI show I'm level?
13
What do the gyroscopes used in commercial aircraft actually look like?
2
What extreme measures might a pilot take to avoid extreme weather?
3
What kind of Gyros are being used in smaller regional jets?