How would an Inverted Delta Wing planform behave, Straight part forward? Are there wings shaped this way?

There is info about straight edge wings, swept back wings, swept forward wings, delta wings. Is there also info about a Delta wing with a straight leading edge and a tapered trailing edge, the point rearwards, like a manta ray?

To answer your second question first: Yes, these are mainly used for ground-effect craft. The idea is to have positive angle of attack, a tapered wing and a trailing edge with constant, low distance from the ground. This question covers their sweep angle.

The wing would behave just like an ordinary, forward swept, low aspect ratio wing. It would have a small lift curve slope and a lousy stall behavior, because the low tip chord will make the tips stall first, causing the whole wing to roll. Unfortunately, the low leading edge sweep will prevent vortex lift, which is a typical feature of regular delta wings, to develop, so the stall angle will be only little higher than that of a straight wing with the same aspect ratio. 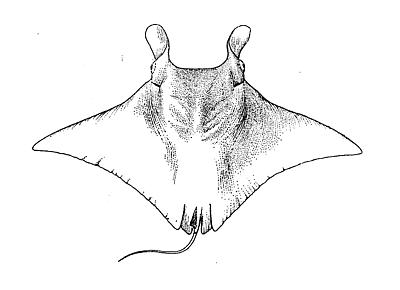 Manta rays are more diamond-shaped, so their "wing" has positive leading edge sweep and almost zero quarter-chord sweep. Their stall behavior would also be nasty if they were rigid, but the wings are actually fins and used for propulsion, not lift, so stall does not mean that the fish plunges to the ground. The picture above shows an Atlantic manta and was shamelessly copied from Wikipedia.

See also the '30s Arup planes, from Indiana. Straight LE, and semi-circular TE. A low aspect-ratio lifting body that did not suffer from high parasitic drag due to wing-tip vortexes, and were slippery and quick with very low landing speeds. Hatfield in the '80s followed them with his "little Bird" series which flew much the same. The '40s Eschelman diamond shaped "flying flounder" was another 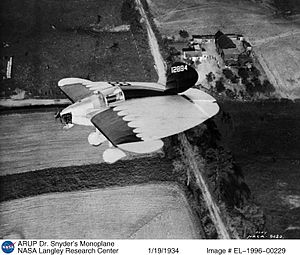 The reverse delta wing configuration, which Dr. A. Lippisch proved to be very stable in ground effect, creates a very steady position of the Cm (pitching moment) when the wing is close to a surface.

15
What are the disadvantages of a delta wing biplane design?
8
Where is the spanwise flow? How does the span wise flow point the air towards the wingtip?
4
What would the pros and cons be of this 'zig-zagged' high-sweep wing planform?
6
Are there any aircraft where the wings are swept forward of the cockpit?
0
Spanwise flow and wingtip vortices in forward-swept wings
17
Why does the F-15 have a swept-back trailing edge at its wing tips?
3
Why is sweep angle measured at the 25% chord?
3
What is the NACA Series of the Rockwell B-1b's wing design?
5
Besides forward swept wings, which are the other most unstable wing configurations?