If a warning emerges, why not land as soon as possible?

This question is based on this episode of Air Crash Investigation concerning crash of Lauda Air flight 004.

Reverse Thrust Indicator warning is shown at 21 minutes and 10 seconds into the video. At the time of flight, such a warning was deemed a non-emergency, though wrongly. Yet should the pilots still have continued the flight?

I would think it safer to err on the side of caution, and try to land instantly whenever a warning emerges? The video depicts the pilots' verbalised guesses and thus perplexity over on the warning's causes.

As rbp explained, information provided to the pilots is differentiated based on how serious the problem is, from informational up to emergency. Part of designing an aircraft is determining how serious different failures will be.

As technology has advanced, aircraft have become more and more complex. New devices and systems allow aircraft to become faster, safer, more capable, and more comfortable. However, more complexity means more things that can fail. The airplane's systems are analyzed to understand the ways that a system may fail, and how it will affect the rest of the airplane. The results are used to determine how serious different indications may be, and to provide instructions to the crew about what procedures to follow.

With the complexity of modern aircraft, it is much more likely for at least one system to have an issue. It does not make sense to ground an aircraft just because a coffee maker isn't working. Aircraft will have a minimum equipment list (MEL) which allows the aircraft to depart with certain systems inoperative. Circumstances such as ETOPS will further limit which systems may be inoperative. Once in the air, the crew is informed by their checklists about the correct actions to take. Some indications are not critical, others will be. Modern aircraft go even further in determining the severity of indications. Certain less critical information will be suppressed during high-workload phases like takeoff and landing to avoid distracting the crew. Some aircraft will even make it simple for the crew and give them a message like "LAND ASAP".

The basic FAA regulation for crew alerting systems on transport aircraft such as the 767 in your example is 14 CFR §25.1322 (b):

(3) Advisory: For conditions that require flightcrew awareness and may require subsequent flightcrew response.

It is up to the group certifying the aircraft to convince the FAA whether something requires immediate awareness and/or immediate response.

Some specific alert systems are covered in different sections, such as §25.1305 (d):

(i) Is not in the selected position, and

(ii) Is in the reverse thrust position, for each engine using a thrust reversing device.

There isn't much more specific than that, but there are other rules that affect the warning system such as §25.729 (e):

(6) Failures of systems used to inhibit the landing gear aural warning, that would prevent the warning system from operating, must be improbable.

So in order to make a failure of the warning improbable, the system may display a false indication rather than fail to indicate a valid problem. Most indications for things such as fires are false. It is much better for the system to assume the worst if in doubt, and for the crew to assume the indication is valid and act accordingly.

So, to answer your questions:

Many systems on a modern aircraft are used in take-off and landing and don't affect cruise flight much. When such system fails, it usually causes no trouble at the moment, but pilots know that it will complicate landing. In such case it's better to remain in the air, possibly continue to destination, and land when the aircraft has burnt most of it's fuel and is light. And possibly divert to an airport with longer runway, better weather, easier approach procedure or better maintenance facilities depending on what is needed.

And note that thrust reversers are just such system. Most reverser faults just mean you won't be able to use them on landing and thus need to factor in a larger margin of error. And that is easier when the plane is light, so continuing to destination makes sense.

How it works regarding distinction between warning and caution is already explained in the other answers.

Also note that in case of Lauda Air flight 004 if they did decide to divert it would not have helped them because landing from cruise flight level takes 20-30 minutes even if there is suitable airport nearby. They would have had to shut the engine down and there was nothing indicating they should. The message was apparently amber indicating a fault, but if it didn't sound master warning they didn't have any reason to think they should.

Here's an example from the R-22 Aircraft Flight Manual regarding the clutch light. The manual provides a process whereby the clutch can be disabled to prevent it from loosening anymore (a very hazardous situation), and then says "land as soon as practical," but if there are compounding factors, then find a field or other open space and land right away. 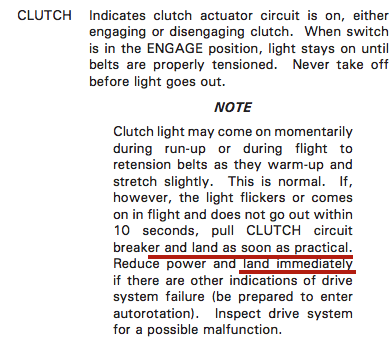 In large aircraft, there is a centralize warning panel which look something like this: 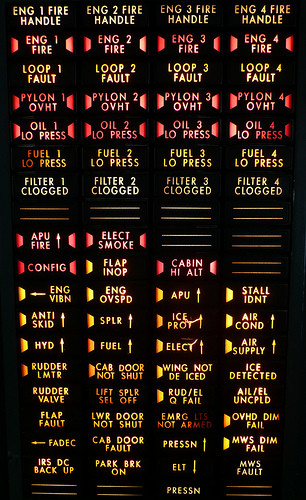 The color of each annunciator light means something different:

And all the yellow caution and all the red warning lights are re-annuciated directly in front of the pilot's eyes: 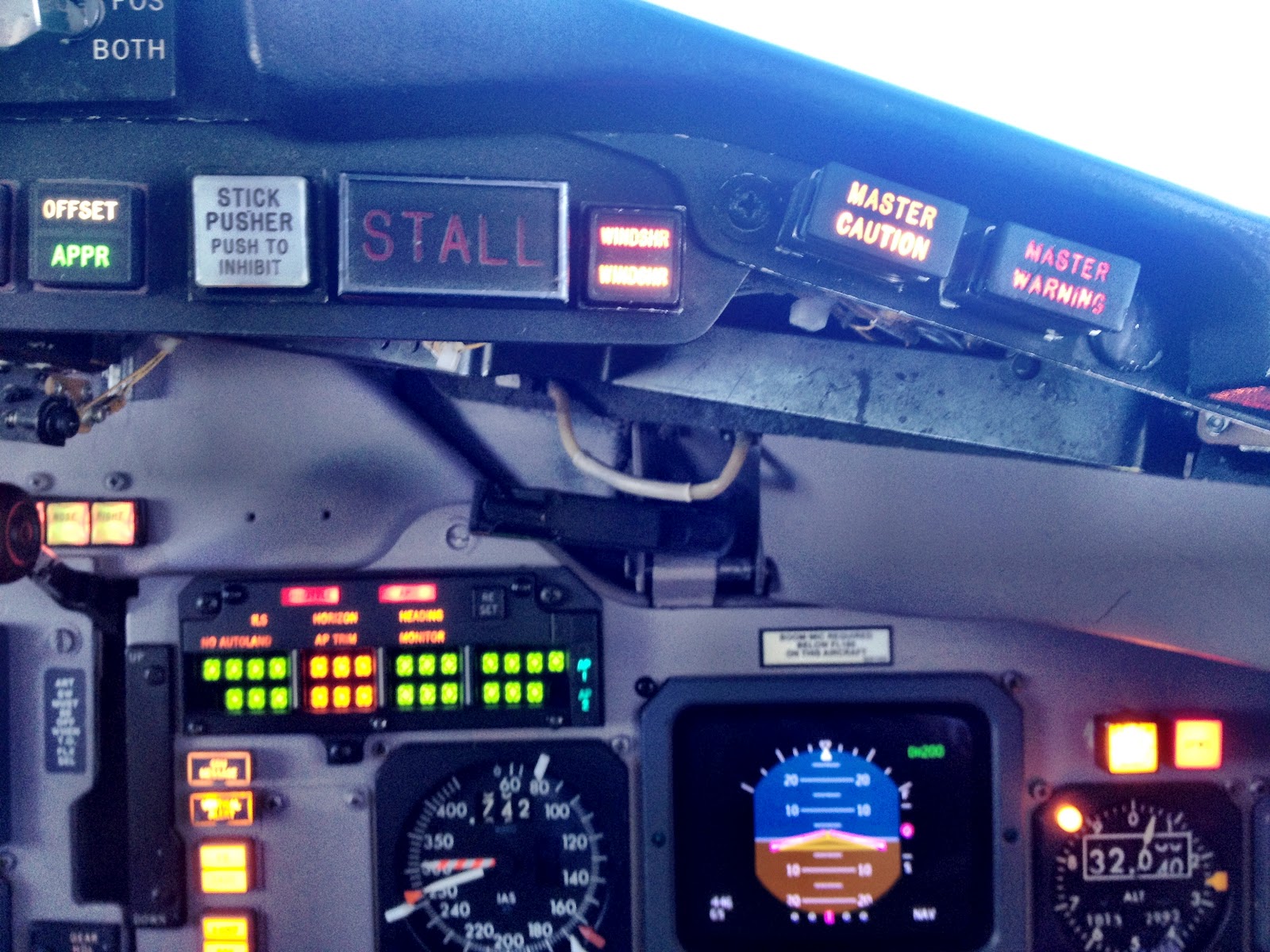 Depending on color of the light, the pilot can tell the severity of the problem, although as you point out, sometimes he can make a mistake.

The B767 in Lauda Airlines example had been showing reverser warnings for a long time and the systems were investigated so many times, yet no fault was found. Therefore the warning wasn't seen as "dire enough". No simulations of deployment during cruise flight were included in pilot training; therefore the crews tended to dismiss the warnings. Accidental deployment at cruise was found to be survivable IF the pilots recognized the deployment and reacted in LESS THAN 1 second. Without additional training, the pilots took too long to recognize the deployment and the plane would be doomed.

Not the answer you're looking for? Browse other questions tagged emergency accidents or ask your own question.

26
What is the difference between being instructed to land "as soon as possible" or "at nearest suitable airport"?

19
In case of emergency, is it possible (doable) to land a small propeller-driven aircraft on an aircraft carrier?
26
What is the difference between being instructed to land "as soon as possible" or "at nearest suitable airport"?
4
Are there safety countermeasures for test flights that simulate crashed flights?
20
Is is possible to land a midsize commercial plane on an Ford Class aircraft carrier?
11
Is it possible to land a commercial aircraft with an elevator trim stuck at a high degree?
34
Why did the Swiss International Air LX40 (a 777-300ER) emergency land at Iqaluit airport?
9
Is there no warning if landing gear is not retracted during flight?
9
Why would a pilot on final to a towered airport not speak up when ATC clears another aircraft to land on the same runway, without mentioning them?
0
Why did TWA800 not stall?
5
Why not more Max 8 accidents?