What is the fundamental physics behind L/D decreasing as AoA increases beyond the optimal point?

Why does lift over drag decrease with AoA past the optimum AoA? Is it because the backwards vector for a given lift force on the wing is now larger for a given air particle compared to lower AoA?

For a single air particle interacting with the wing at higher vs lower AoA does the higher AoA cause a larger change in the velocity of the air particle?

Are there other factors involved?

The fundamental reason is that at high enough AoA, the lift becomes zero -- certainly no later than an AoA of 90°! At that point L/D is zero (there'll be lots of drag). So somewhere between 0° and 90° there will be an AoA with the highest L/D, and that is by definition the optimum AoA. Slightly beyond that angle there's nothing for the L/D to do except decrease, because if it didn't, the angle we're beyond wouldn't be the optimum.

Now if you were asking why that particular angle is optimal for a given airfoil, we would have to go into aerodynamics and boundary layers and whatnot. It's not merely about what happens to the molecules that (try to) hit the underside of the wing, but at least as much about how well the molecules above the wing can be convinced not to hit it.

Note that above the optimal AoA, until the critical (stall) angle, the lift generated still increases with increasing AoA -- it's just that in this range drag increases faster than the lift does.

At low angle of attack, the oncoming air hits the airfoil right at the tip of the leading edge. There is not much of curvature to negotiate before the long stretch with little curvature behind the nose follows. In order to change its flow path quickly, the air molecule must flow in a high pressure gradient, and this gradient accelerates it not only sideways, but also in flow direction. Consequently, high curvature areas see high local flow speed. (I explained the physics in a very simple way; if you want to know more, please read this). 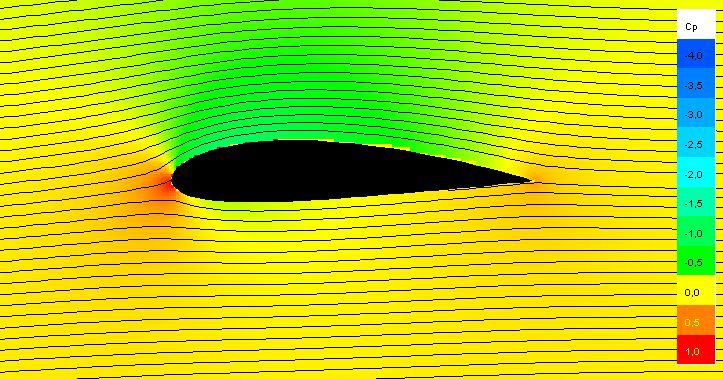 With increasing angle of attack, the suction area over the airfoil needs to become stronger to force the airflow to follow the contour. Consequently, more of the oncoming flow is sucked over the wing, and the stagnation point shifts downwards on the airfoil's nose. Now the particles which hit the nose just above the stagnation point have to negotiate most of the nose's curvature, which needs more acceleration. This creates a suction peak in the flow around the nose and high local flow speed on the top side.

The flow over the bottom of the airfoil, however, will be decelerated near the stagnation point and see only little acceleration while it flows towards the trailing edge. See below for a plot of the inviscid pressure distribution. The pressure coefficient $c_p$ correlates with speed, and $c_p = 0$ means that local speed equals the flight speed of the airfoil. Negative values denote suction, and local speeds in excess of flight speed, whereas positive values of $c_p$ indicate slower speeds. Note that the y-axis is plotted reversed, with decreasing values up. 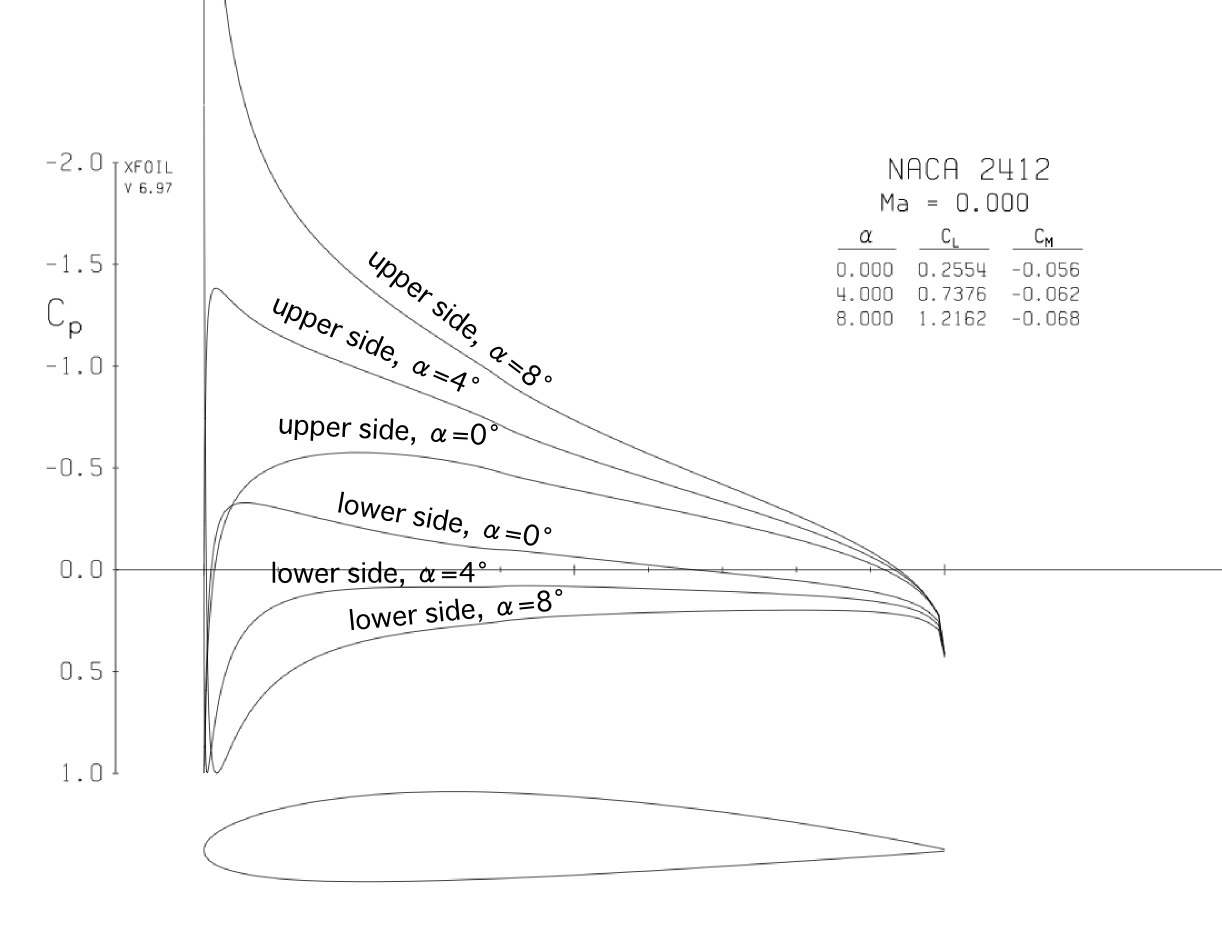 A high local speed will also cause high local friction. Also, the long pressure rise on the upper side at high angle of attack needs more energy from the outer flow to keep flow attached, so the boundary layer grows here and slows down more of the air than at low angle of attack (again, extremely simplified). Both effects mean that drag goes up at higher angle of attack.

If you increase the angle of attack further, the flow is not able to follow the upper contour and will separate. This causes the pressure rise to stop at the separation point, so downstream the pressure decreases. Since this part of the airfoil points slightly backwards, this local suction increase will drive up drag. This starts before stall and on a well-behaved airfoil the separation point will first be near the trailing edge and move upstream with increasing angle of attack. This means then drag will rise progressively with higher angle of attack. Since most of the flow is still attached, lift will still grow until stall.

I think you were asking this question related to wing physics and not to airfoil physics. Here comes the physics of induced drag. I will try to simplify the explanation.

But... what about the tip of wing? Both sides are in contact so they should be at the same pressure?

So, we have a lower surface of the wing with higher pressure and the tip with "normal pressure", so, naturally in the lower surface the air will try to go from the root to the tip.

On the upper surface the situation is the opposity, the root will have lower pressure and the tip higher, so the air will try to go from the tip to the root.

As in the tip both sides are connected, the air will try to scape from the lower to the upper level (that's why there are wing tips). And that's why the tip vortexes are created with the typical pictures

Ok, now let's talk about drag. Drag is actually "any energy we are losing just because we fly" (ok, is a simplification but allows me to explain the next step). So, the airplane is losing energy and gives it to the air to create the tip vortex. The bigger the tip vortex the more energy is lost.

So, know coming to the question, why efficiency (L/D) decreases? So, as the angle of attack increases the lift increases linearly (proportional to the increase of the angle), however, the energy lost in the tip vortex (that is a component of drag) increases quadratically (proportional to the square of the angle of attack), that means that the drag is increasing more quickly (but starting at a lower level) that lift.

So, we reach a point where the increase of drag makes the efficiency starting to decrease. That point can be calculated with the formula provided in the previous post.

Notice that the physics of the wing is more complicated as there are other drag components also interacting with the wing. It is also true that "infinite" wings have a maximum L/D, but there is a different mechanism in place.

At higher AOA, flow is separated, consequently Stall happens. Due to stall, Lift decreased and Drag increased, so L/D decreased.

Not the answer you're looking for? Browse other questions tagged wing lift or ask your own question.

45
Why does supersonic flight detach airflow from a wing?
19
How does chord length affect wing design?
3
Is (L/D)max achieved at a specific speed or AOA?
5
Why does lift decrease and drag increase when approaching the stall condition?

19
How does chord length affect wing design?
11
Does the downwash created by induced drag increase or decrease lift?
4
What factors determine the direction of the resultant force vector?
2
How to calculate aileron deflection for achieving similar roll dynamics at thin and dense air?
4
How can the lift force be changed without changing velocity?
3
For a flying wing airfoil, which AOA is to consider when selecting Cl?
1
What happens to the pressure differential of airflow under and over the wing as the critical angle of attack is reached?
14
What amount of lift would be created in the fallacious "lift from equal transit time" theory?
1
How does the airflow above an airfoil account for the downward turning-action of the airflow below the airfoil?