What are the ways to keep the birds away from airfields?

I know bird strikes are a major issue for many airports, and that measures are taken to keep birds away.
There are some obvious things airports can do like not to have any stray garbage, food, etc. in the open, but I'm sure other less obvious methods are also used.

What exactly are some of the widely used techniques to keep birds away from airports?

The FAA has an FAQ on bird strikes and other wildlife hazards, which includes a (broken) link to their Wildlife Hazard Management at Airports - A Manual for Airport Personnel document.

Chapter 9 is called "WILDLIFE CONTROL STRATEGIES AND TECHNIQUES AT AIRPORTS" and includes the following techniques:

Habitat modifications to minimize food, cover, and water and physical barriers to exclude wildlife are the foundations of wildlife hazard management programs for airports. In addition, an integrated array of repellent techniques is necessary to disrupt normal behavior and to stress hazardous wildlife that attempt to use the airport. These repellent techniques must be used judiciously and backed by real threats to minimize habituation. To this end, lethal control of selected individuals of common species is sometimes necessary to reinforce repellent actions.

about.com has a good article which lists the many methods that are used to scare birds away from airports. It includes: 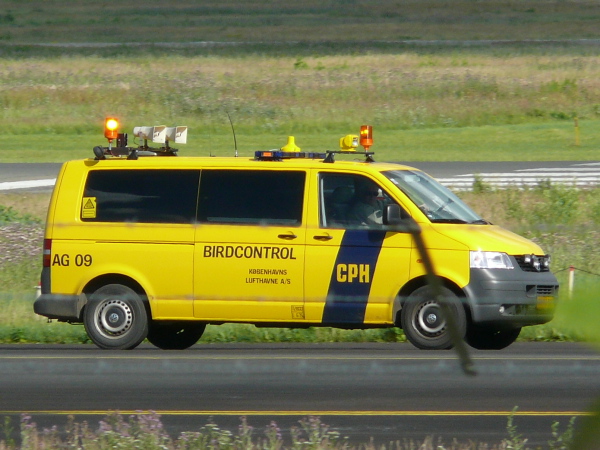 On a visit to Blackpool Airport control tower a few years ago, they mentioned that they flew a hawk/falcon (not sure which) every day to deter birds

The airport authorities use a number of techniques to manage the hazard of bird strike in and near airports. These include,

Usually, a combination of above methods is used to manage the birds.

The only procedure available for flight crews is to either delay the flight (or land in alternate runway if its available) in case birds are detected over an area. This however, is dependent on a number of variables like fuel availability, flight schedule etc. There are some radar systems under development that could detect birds; however, these have not reached operational stage yet.

Trap, kill, harass, or deprive them of food and shelter. The number of bird strikes at my airport has been reduced dramatically by consistently harassing the birds to the point where the birds eventually adapt and learn.

All the correct information has been added except one point. The engines nose spinners have a design painted on them. Once the engines are running the design is suppose to look like the eye of a bird of pray to scare off birds in flight. Does it work I can not say but they claim it does.

Not the answer you're looking for? Browse other questions tagged safety airport birds or ask your own question.

2
How can bird hazard be avoided?
45
What are the spiral marks in the center of the engines?
9
Why would flares be fired into the air after a flight lands?
3
Are there any preventive measures against bird strikes while in flight?
2
Do the spaces between runways and taxiways need to be grass/scrubs?

16
What is the best strategy for landing when a flock of birds is on the runway?
8
Can multiple airfields be in the same airspace?
12
What technology is being moved forward to keep pilots from crashing planes?
3
Has anybody done gliding experiments with exact replicas of the birds or other real world flying creatures?
4
Why are some airfields not on any sectional chart nor listed in the directory?
2
Would mechanical indicators have helped in the Air France 447 incident?
0
Why are birds attracted to airports?
2
Why do most U.S. cities with multiple airports try to concentrate airline operations at just one airport instead of spreading out the load?