What is a red airway on the VFR sectional?

The VFR sectionals show a number of airways/routes marked in red. Here are several near KMTH, you can see B-646 extending east of the NDB: 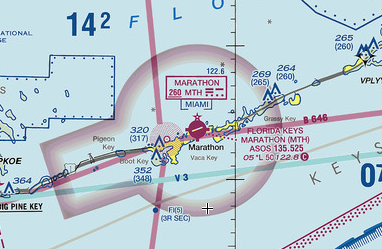 There are others in Alaska that are lettered A, R or G, e.g. A-7 runs between the CMQ and MNL NDBs.

What are these airways or routes and how are they different from Victor airways?

These are Red Federal Airways, and can be found in Order 7400.9

Red airways are one of a 1950s-ish system of airways: Red, Blue, Green, Amber, which are designated by an NDB (rather than a VOR or VORTAC for a V or J route).

These routes were prioritized: GARB, with Green routes having the highest priority.

Not the answer you're looking for? Browse other questions tagged usa navigation airspace or ask your own question.

22
When using the phonetic alphabet, for airways, should we say Uniform or Upper?
7
Why does this Garmin GMA340 have an Airway/Inner marker indicator?
4
What are en-route VHF marker beacons (75 MHz)?
3
What is the history of the name of airway?

8
Are there any widely applicable models for plausible aircraft auto-routing?
15
What is the purpose of a Victor Airway?
1
What would be the airspace class when no vignette is visible on a US VFR sectional chart?
3
When do pilots facing bad weather turn back (U-turn)?
10
What is the purpose of this interesting pattern of class E airspace in northwest Alaska?
10
What is the primary reason that the non-towered airports ACV, TVL, SGU, BIH, and SIT/PASI have E4 extensions to E2 airspace?
4
Is the "auto-routing" created by online flight planning resources preferred by ATC over Direct routing when NO preferred route exists?
7
Are there conventions on which side to travel on Victor airways - USA?
4
How far in advance of "effective date" are VFR sectional charts usually made available? (US)
7
Why would there be two RNAV waypoints co-located with a VOR?