Why do engine cowl lips appear larger and more blunt on the sides than on the top and bottom?

I was looking into engine nacelles. I was not able to understand the design shape of it

Why is it that in most aircraft, the engine cowl lips on the side are bigger (more blunt) than on the top and bottom.

For subsonic aircraft, the nacelle lips need to be blunt and well rounded to accommodate the different flow regimes encountered during flight. At take-off (right side of the image below), the engine will suck in surrounding air, so the stagnation line of the intake flow is well outside of the center of the lip, whereas in cruise (left side of the image below) only the center stream tube of oncoming air is ingested, and much of the air flowing towards the nacelle is spilled over the sides. Accordingly, the stagnation line is well inside of the lip's center. A sharper lip contour would lead to flow separation due to the small radius (and hence the rapid change in direction) the flow would have to endure. 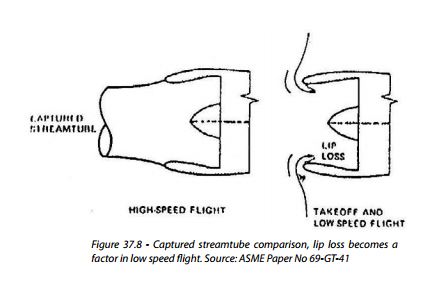 Image from Aerodynamic Design of Transport Aircraft by Ed Obert, 2009

Added to this is the influence of angle of attack, which will shift the stagnation line up or down on the lip. Sideslip will shift it left and right. Nacelles are mounted far ahead of the wing not only for flutter suppression, but also to reduce the wing's influence on the intake flow. I doubt that the added variations of sideslip would be stronger than those of angle of attack, so I agree with @fooot that more bluntness on the side is unusual.

Earlier designs used less blunt lips and had problems with flow separation in the intake at low speed, which led to the addition of secondary inlet doors. Today, the intake is optimized with CFD and this means that the radius may be continuously changing over the circumference, due to the influence of wing and fuselage on the flow around the nacelle.

Here I have to disagree with @fooot, because accessories are mounted close to the engine, and intake lips are quite a bit ahead of the engine face in order to equalize the flow. The flow speed at the engine face is around Mach 0.4 to 0.5, so the intake has to accelerate or decelerate the flow quite a bit, without separation or much cross flow. A lot of that happens already outside of the intake, but still needs some intake length, and most accessories are so far away from the intake lip that they do not influence it's thickness.

Images of 767 and 777 aircraft that I looked at show pretty uniform lips all the way around. This 757 engine (image below) looks thinner on the sides, which is the opposite of what you have seen. 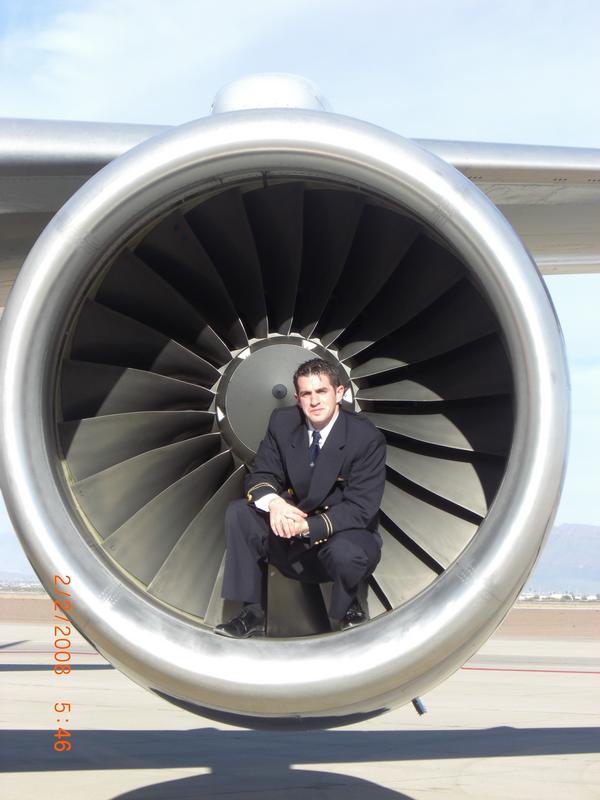 The shape of the cowl (and lip) is going to depend mostly on the shape of the nacelle. The 757 engine (image above) has engine accessories at the bottom of the engine, which requires a thicker nacelle to cover, which requires a larger radius on the cowl lip to streamline. As discussed in this question, the 737 engines have a unique shape to provide ground clearance, so the accessories are pushed to the sides.

50
Why are the Boeing 737 nacelles odd shaped?
33
Why do we never see high-bypass turbofan engines sharing the same nacelle on large airliners and similar aircraft?
17
Why do most military aircraft use different engines than commercial aircraft?
27
Why do turbofan blade tips exceed the speed of sound while prop tips should not?
29
What are those hatches on the engines of a B-2 that are open during takeoff?
19
Why do military turbofan engines use a low bypass ratio?
15
Do nacelles around aircraft engines help in reducing the engine sound?
3
Why are the Boeing 747-8 engines on the wings spread apart?
16
What is the purpose of the inlet doors of the Pratt & Whitney JT3D?
8
How does a supersonic jet engine differ from a subsonic jet engine?
See more linked questions

50
Why are the Boeing 737 nacelles odd shaped?
33
Why do we never see high-bypass turbofan engines sharing the same nacelle on large airliners and similar aircraft?
12
Why are twin engine airliners more fuel efficient than three or four engine airliners?
11
Are engines fed differently in reduced gravity aircraft?
11
Why was the engine of the Ju-87 Stuka not replaced with a more powerful one?
3
Why are some engine nacelles thicker than others?
7
Is it practical to integrate turbofan or ramjet engines into an airliner wing?
0
Why are inlet vanes used instead of variable geometry inlets to prevent compressor surge/stall?