Are the military tilted-thrust aircraft in the film Avatar feasible?

As full-scale aircraft or as models / UAVs / drones? Is anyone working on making these real or are they fundamentally flawed designs, or needing new materials to be invented?

I presume you're talking about the fictional Aerospatiale SA-2 Samson. From that page:

Ducted fan VTOL aircraft have been flown since at least the 1960s. A notable example was the Bell X-22, a quad-ducted fan experimental aircraft built for the US military. It has no relation to the later V-22 Osprey tiltrotor. Though successful, no military aircraft since have used that technology. 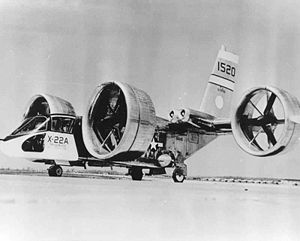 which has similar overall characteristics to the SA-2 depictions.

They are feasible in as much as the atmosphere on "Pandora" is thicker and the force of gravity is lighter. C.f. Avatar Wiki

This allows for both large winged reptiles (?) and smaller tiltrotors than are possible on our current earth.1

1 There is evidence that our atmosphere was more oxygen-rich in the geologic past and may have been thicker, allowing for similarly large reptiles.

Yes, they are certainly feasible. In fact, one basically exists already: the V-22 Osprey.

The main difference being that the V-22 has ailerons for roll control and wings for lift in forward flight.

Power isn't a problem, it's just a multirotor helicopter... think Chinook, on a different axis. And control, for the most part, isn't a major issue.

Here's a working model, for example. I don't believe there are any full size models, but the Osprey is "close enough" to prove the concept.

17
What exactly is a "drone"?
8
Is it possible to design a helicopter with fixed rotor blades only (no blade angle/flap/pitch)?
1
Why aren't AMA certified radio-control club sites shown on aeronautical charts?
9
Can "a drone" damage the wing of "an aeroplane" to the extent it actually threatens its ability to fly?
3
What are some of the fastest UAVs? How do the pilots ensure that their controls are being transmitted to actions?
1
Advantages and disadvantages of air intakes above fuselage/wings in jet fighters?
25
Why has the 777x been designed with folding wingtips?
8
What are the failure mode(s) for flying cars in case of power loss?