Why are updraft carburetors standard in aviation?

My only detailed experience with carburetors is in aircraft. I'm pretty familiar with the principles behind float-type carbs, but I recently saw a schematic for a "downdraft carburetor" with a choke valve. This got me curious, so I did a little research and found that what I'm used to is an "updraft carburetor", and that (according to wikipedia) they fell out of fashion in the automotive industry in the 1930s.

Why is the updraft carburetor design so prevalent in aviation? Does an updraft carb actually have a choke valve?

Images below to provide a little context for those of us who are not engine experts! 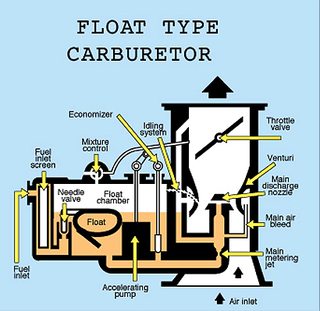 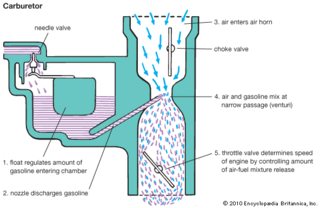 I can think of three reasons to use an updraft carburetor in a single-engine GA airplane:

The float-bowl regulator in your carburetor is cheap and simple, but it is far from perfect under all conditions. Short periods of zero-G or negative-G operation, caused by a quick dive, turbulence, or even bumping over uneven ground, can jiggle the float and spill liquid fuel into the venturi.

In a downdraft or sidedraft carburetor, this liquid falls into the intake manifold and wets the interior walls and may get into the cylinders, causing an over-rich mixture condition. The engine is said to be "flooded" and will not run until the liquid is cleared out.

With an updraft carburetor, the spilled fuel tends to fall out before it can foul anything.

If your aircraft has fuel tanks higher than the carburetor when in cruise attitude, you may be able to remain under power if your fuel pump fails. An updraft carburetor can be mounted lower in the engine compartment than sidedraft or downdraft types; in fact, it is usually under the engine.

Early automobiles did this to avoid the need for a fuel pump; fuel was fed by gravity from a fuel tank higher than the carburetor, e.g. just below the windshield. The lower the position of the carburetor, the deeper the fuel tank could be.

If you look inside the cowling of most GA planes, you will see much more space under the engine block than above it. That seems to be the best place for lots of auxiliary equipment and attachments, including the carburetor and air filter.

You get a lot of answers about shorter intake manifolds, less probability of flooding the cylinders if your carb floods, and many other things.

But to me, it comes down to one big issue: visibility. You need to mount your engine high enough that you have adequate prop clearance without having to have long, heavy landing gear struts. So you mount your engine fairly high on the airframe. Now do you want to have a carburetor sitting on top of that engine directly in the pilot's field of view? Why would you do that when you have all that space down below the engine?

I dont know but when reading about the Northrop P-61 Black Widow WWII US night fighter I found this in Wikipedia :

In March 1941, the Army/Navy Standardization Committee decided to standardize use of updraft carburetors across all U.S. military branches. The XP-61, designed with downdraft carburetors, faced an estimated minimum two-month redesign of the engine nacelle to bring the design into compliance. The committee later reversed the updraft carburetor standardization decision (the XP-61 program's predicament likely having little influence), preventing a potential setback in the XP-61's development

The fact that they made the decision to only use updraft carburettors, even though they later reversed the decision, indicates that there must be a good reason - maybe you can find the committee's notes on the subject.