Why doesn't an airfoil rotate?

As far as I understand, two of the reasons how an airfoil generates lift are Coandă effect and downwash. However, if there is upwash near the leading edge, why isn't an airfoil rotated by the two forces (upwash at the front and downwash at the back of an airfoil)?

It does rotate. In fact, in aerodynamics, this rotation force has a name: pitching moment. Pitching moment changes depending on the angle of attack.

If you use an airfoil with a positive pitching moment you need something to counter the rotation. For most aircraft the solution is the horizontal stabilizer (the tail). An alternative solution is the canard.

For chevron shaped (V-shaped) flying wings and tailless planes the solution is to twist the wing (in regular planes it's called washout but flying wing designers call it "twist"). The twist causes the wing tips to have less angle of attack (sometimes negative) so that the overall rotation force for the entire aircraft is zero.

There are no two (aerodynamic) forces. Force is not caused by the up- or downwash itself, but by the change from up- to downwash. The air is only accelerated downward and this change in it's momentum causes an upward force on the wing everywhere, there is no aerodynamic down force. Due to the pressure distribution however the centre of lift is about quarter-chord for subsonic airfoils and changes somewhat with changes in attitude.

There however obviously is a down force, gravity. If the centre of gravity and centre of pressure are offset relative to each other, there is a moment that rotates the aircraft. That's why a plane needs horizontal stabilizer with elevators that allow shifting the centre of lift by adding a bit of controllable lift far from the centre of lift of the main wing.

Perhaps you're thinking of something like a fanwing, which incorporates both centrifugal fans and an airfoil into the wing 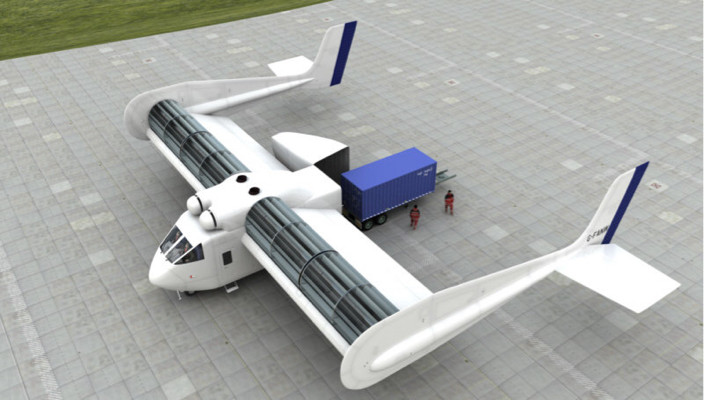 You are right, lift is concentrated in the forward part of an airfoil, especially at high angle of attack. If you take a single wing and drop it, it will start to rotate around its spanwise axis quickly. This effect is called autorotation (not to be confused with autorotation in helicopters, though!). Model aircraft pilots should have seen that before: When a model breaks apart in midair, its wing will in many cases autorotate to the ground.

Below you see the pressure acting on an airfoil symbolized by arrows (yes, that is XFOIL at work), and arrows pointing at the airfoil indicate pressure higher than ambient air pressure, and those pointing away from it indicate suction. Their length is proportional to the magnitude of either pressure or suction.

This shows that the forces in the forward part of the airfoil are more intense than those in the rear part. The aerodynamic forces which depend on the angle of attack are focused at the quarter chord point, and without added balancing masses of a fuselage and engines, will be forward of the wing's center of gravity.

Of course, this is strictly true only as long as we have no flow separation. Once rotation starts, separation is unavoidable above the maximum angle of attack. However, inertia will keep the wing spinning until the trailing edge points forward and a similar pressure distribution develops. This gives the rotation another push and keeps the wing spinning over a full revolution, and the whole process starts over.

Because the horizontal stabilizers provide a counter force to the plane in its entirety so the pitch remains stable.

If the airfoil is cambered (in other words unsymmetric looking sideways) it does indeed rotate. This is why the control surfaces are needed with a preferably long moment arm and why building flying wings is difficult.

9
What is the difference between a leading edge flap and a slat?
5
How to read the pressure diagram of an airfoil?
4
What is the meaning of the percentage used to describe the thinness of this glider's airfoil?
6
What is the effect of flow separation on lift, pressure distribution and drag?
1
How to find coordinates of the geometric center of a NACA 4-digit airfoil?
1
How to transform a NACA airfoil into a near-circle using the inverse Karman-Trefftz?
3
Shouldn't the upwash on an airfoil increase the effective angle of attack?
0
Leading edge or trailing edge stall?
2
How does airfoil affect the coefficient of lift vs. AOA slope?