Can multiple airfields be in the same airspace?

After reading this answer that a restricted airport caused a strange cutout in Class B, I am wondering if it possible that there are multiple airfields in the same airspace?

Please note that I am not talking about an airport which is under an outer circular shelf of a Class B or C airport.

Another example can be found with Berlin-Tegel and Berlin-Schönefeld, which have adjacent control zones that share a common boundary west to east and have an overlaying class C TMA airspace up to FL100. Both airports share the same TMA controller/approach sector:
BREMEN RADAR Approach: 119.62 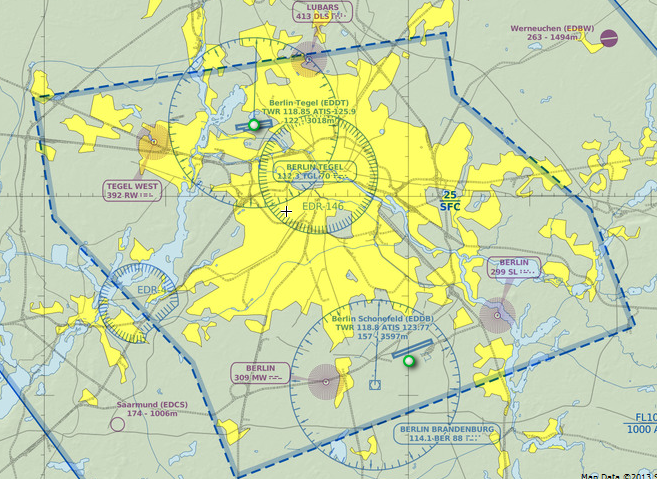 FAA is implementing a new airspace system which will increase efficiencies at metropolitan areas with complex air traffic flows. This system, known as Next Generation Air Transportation System is introducing the concept of a metroplex:

In FAA parlance, metroplex refers to a system of airports in close proximity and their shared airspace that serve one or more major cities. A metroplex has at least one, but often two or more major commercial airports.

Not the answer you're looking for? Browse other questions tagged air-traffic-control airport airspace or ask your own question.

24
What is a TRACON?
17
What is this strange cutout in Class B of Kansas City International Airport?

5
Who controls VFR flights in class B airspace in Europe?
6
What separation and information does ATC provide in different airspace classes?
12
Which parts of class E airspace can an ultralight (part 103) fly in without prior ATC authorization?
8
May aerobatics be performed over a controlled airport without getting a waiver?
2
Are there any problems opening a helipad close to an airport?
7
How to fly a drone in Class D in Italy?
10
What is the primary reason that the non-towered airports ACV, TVL, SGU, BIH, and SIT/PASI have E4 extensions to E2 airspace?
0
May an ultralight vehicle pass directly above KEGE at 9200 MSL at 1600Z with no prior authorization without violating FAR 103.17?
2
In reference to airspace, what does the FAA mean by "within the lateral boundaries of"? Is this construed to also imply a vertical limit?
4
On the LAANC map for sUAS operations, why does the permitted ceiling drop to zero southeast of KGFL?