Do runways need to be repaired after gear up landings?

There have been may cases of civilian, commercial, and military flights that have either been forced to or accidentally landed gear up.

Does the runway need to be repaired after such a landing, if so, how long does it take, and how extensive are the repairs?

These are some of the different scenarios that come to mind:

How would runway repair be conduced in these scenarios? 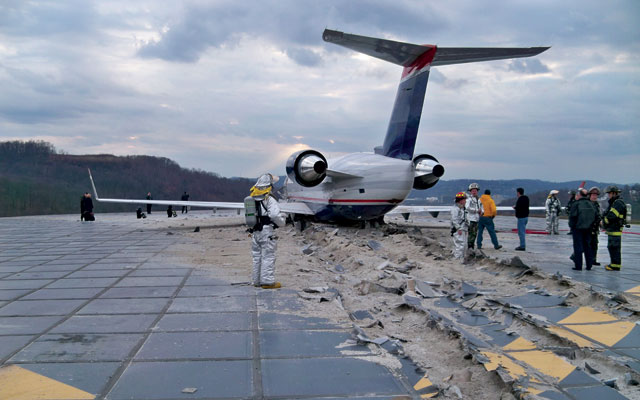 Runways are usually made of several feet of reinforced concrete. Any damage to them after a wheels-up landing is superficial at best. Details depend on circumstances, but in general light aircraft will cause less damage. A full wheels-up landing is rather easy on the runway: The aircraft's fuselage and wing fairing structure are flexible and malleable, so it will buckle and bend until the local surface pressure is too low to cause more bending. To really damage a concrete surface you would need carbide tools, not sheet aluminum.

An unwheeled landing gear strut of an airliner is probably the worst scenario. The Airbus in the linked video had only a damaged nose gear, which carries a small fraction of the total load, and you will see in the close-up at the end of the video that the runway did not suffer. A similarly damaged main gear, however, will cut a groove.

All what is needed for repair is some fast-curing liquid for filling the nicks and scratches and some paint to repair the runway markings.

If you land a composite aircraft wheels-up, the concrete will act like sandpaper on the structure. The landing zone will be marked by white epoxy dust. A broom is all what is needed to put the strip back to its initial condition.

2
How much damage could a landing gear malfunction do?

52
How are runways numbered?
23
Why have converging runways?
17
How often do runways need to have typical maintenance?
6
Why circle an airport after takeoff? (SLC particularly)
9
Why would an airport use crossing runways for takeoff and landings?
23
Which civilian airport has the most runways (current and planned)?
6
Which civil airport has the longest runways in total?
3
Why do simultaneous-ops parallel runways need to be so far apart?
7
Why is there no numbering system for more than three parallel runways?