Why do high-speed water impacts / ditching usually result in structural loss of the airframe?

Plywood sheets can penetrate tree trunks unscathed - when pushed by hurricane or tornado winds. Why wouldn't an airplane fuselage, wings and tail behave the same way impacting ocean water at a steep angle at 300-500 mph? That is, penetrate and remain intact. I have seen a lot of supposition written about this which seems based on common sense, but common sense might be misleading. Has the outcome of such an event ever been demonstrated?

The plywood isn't unscathed by the process 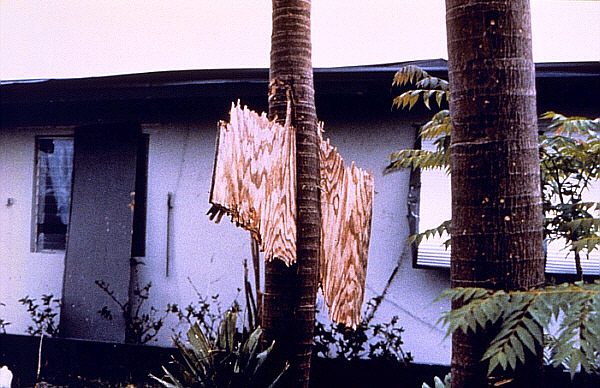 Why wouldn't an airplane [be unscathed by] impacting ocean water at a steep angle at 300-500 mph?

The aircraft will not travel at that same speed underwater. That means that a considerable force is applied to the aircraft to decelerate it in a short distance. That force greatly exceeds what the structure was designed for.

The plywood was like a cleaver blade hitting the tree. Lots of relatively dense mass and momentum concentrating on a very thin edge.

An airplane wing (let alone fuselage) is not a thin edge. It is blunt, rounded, and thick. Behind that edge is a low mass and low density object. For the size, aircraft are very light weight and are a carrying a tiny fraction of the momentum a solid (non hollow) aluminum object of the same shape and volume would carry.

If that plywood wasn't a solid material but rather was hollow like an airplane (thus reducing it's mass, momentum, and consequentially the force acting on the tree), we'd probably see the tree intact and shattered remains of the plywood on the ground.

Has the outcome of such an event ever been demonstrated?

The outcome of an aircraft flying nose-first into water has been demonstrated an unfortunately-large number of times. And it doesn't end well for the aircraft.

The situations you're describing are very different. The physics of a plywood sheet penetrating the trunk of a tree happen because of the extremely high winds. When the wind is 150 mph (and parallel to the board,) the path of least resistance may very well be straight through the tree. Any deflection of the board to one side or the other would increase its cross-sectional area relative to the wind and, thus, would be countered by the force of the wind itself. If you were to otherwise attempt to fire a plywood board into a tree (in the absence of wind,) I think you'd find quite different results (though not quite as different as the aircraft impacting water scenario.)

On the other hand, the physics of flying an aircraft nose-first into water at 300-500 mph differ only slightly from those of flying an aircraft nose-first into the ground at 300-500 mph. In the first few seconds, the water will displace somewhat more than the ground would have, but not much. It takes a lot of force to accelerate the water to the sides quickly enough for it to be displaced by the aircraft at 300-500 mph and, since the force is applied equally (but opposite in direction) to both the aircraft and the water, the forces applied to the aircraft will be plenty to destroy it very quickly. The pieces of the aircraft will continue to lose speed until either they're floating on top of the water (for pieces that are less dense than water) or are sinking at their terminal velocity into the water (which will be quite slow in water.) Meanwhile, all of the kinetic energy of the aircraft is being dissipated very quickly into doing things like crushing the airframe and/or ripping it apart, accelerating water out of the path of the aircraft, heating up the water and (more so) the aircraft, etc.

As far as why the forces would be enough to crush the aircraft (as opposed to what would happen if you fired a long, narrow, cylindrical chunk of solid aluminum into the water at the same angle and speed,) the aircraft is relatively hollow. The cross-sectional area impacting the water is much greater for an aircraft than for a cylinder of solid aluminum of equal mass and length, which means that a much higher total force will be applied to it (similar pressure, but integrated over a much larger surface area.) Furthermore, since a solid chunk of aluminum is a bit more dense than the air that fills most of the cabin of an aircraft, the aircraft would be more apt to crush. The portion of the hull impacting the water would be accelerated into the space behind it, since the forward force being applied to it by the contents of the cabin and the more aft portions of the hull would be much smaller than the backward force being applied to it by the water it's impacting. That is to say, the hull would be crushed very much like an aluminum can. When you stomp on an aluminum can with your shoe, the can crushes rather than penetrating your foot (at least you hope so...) This situation is much more analogous to an aircraft ramming into water than the case of plywood in a hurricane encountering a tree that you mention.

Finally, as others have mentioned, the reason that the plywood can actually exit the tree is just that it doesn't get slowed down completely to a stop by the collision and friction with the tree as it's entering the tree. For a sufficiently-narrow tree, this allows it to exit the other side before it's completely stopped. However, for a sufficiently-thick tree, the situation would be largely unchanged except that the leading edge of the board would stop somewhere inside the tree.

In the case of plywood penetrating a tree trunk, consider the conservation of energy. The plywood might be flying at a certain speed before impact, some kinetic energy is used to break the tree trunk, and then the plywood (presumably) keeps flying at a reduced speed.

Still considering conservation of energy, an aircraft impacting the ocean obviously cannot "continue" flying at a similar speed, so all that kinetic energy (and there is a lot of it) must be used to do some work. That work will be crushing the (relatively delicate) airframe.

It is possible to make a missile or something that can penetrate water (eg. Aerial torpedo). However, such things are designed to do so and passenger aircraft are definitely not.

Not the answer you're looking for? Browse other questions tagged emergency ditching or ask your own question.

22
Has a commercial airliner ever crash-landed in an ocean?

20
Why did this Cirrus deploy the parachute while ditching over Pacific Ocean?
12
Why is ditching speed higher than stalling speed?
7
Why are emergency water landings the majority of the pre-flight safety briefing if they're so rare?
20
Why would landing the space shuttle on water have been unsurvivable?
15
Why are the 737's rear doors unusable in a water landing?
54
Why is the time of useful consciousness only seconds at high altitudes, when I can hold my breath much longer at ground level?