How did the Wright plane takeoff/land?

I don't understand exactly how the Wright brothers handled takeoff with the first gliders and powered plane. I know it has something to do with an elevated rail track. Also, if the flying position was head first, body parallel to the ground, how did they land without injury?

Seperate question: for the initial glider flights, did they start at a high elevation and simply glide to the ground, or was there any method of increasing altitude during flight?

As you said, they used a monorail for launches. The aircraft was pulled forward by a pulley which was connected to a weight which hung from a derrick. First the weight had to be pulled up, the pulley was run to the tip of the rail and back to the Flyer, and once the engine was running and the pilot in place, a helper released the weight and the pulley pulled the aircraft forward. 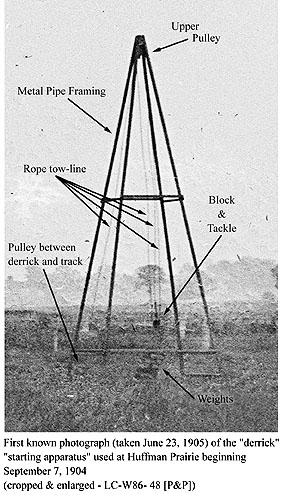 The pictures here are taken from this site; I recommend it for further reading!

Below is a picture of the rail, note the uptick at the end which gave the airplane a gentle push upwards, similar to the ski jump technique of British aircraft carriers.

For landing the Flyer used two skids. Depending on the ground, this could mean a gentle slide to standstill. Rougher landings would mean bruises for the pilot, like the ones suffered by Orville on August 23, 1904. But in most cases of a rough landing, the elevator assembly absorbed most of the impact energy. Elevator repairs were quite frequent.

I know less about the glider launching technique. Most glider tests were done with an unmanned glider held by strings into the wind. Glider flights would be downhill; thermalling was discovered much later (in 1913). However, even Otto Lilienthal already mentioned the uplifting effect of gusts, but neither he nor the Wright Brothers could circle tightly enough to stay inside a thermal.

For their first flight 17 Dec 1903 they used a rail for takeoff, but NO CATAPULT. The Kill Devil Hills, North Carolina site was chosen for strong steady winds, so they DIDN'T NEED a catapult. And their first flight patent claim was to take off without external assistance, demonstrate stable controlled flight, and land at a site no lower than the takeoff point.

The catapult was used only after their experiments were moved to Huffman Prairie near their home in Dayton, because the winds were less than in North Carolina.

Not the answer you're looking for? Browse other questions tagged landing takeoff aviation-history or ask your own question.

6
The stronger the headwind the faster the plane flies if it is in the reverse command regime?