What information does a pilot have about aircraft operating on an intersecting runway?

This incident at O'Hare from July 2006 made me wonder what information is available to a pilot (specifically, in an airliner) regarding aircraft that are using an intersecting runway.

In this incident, the controller had a United 737 line up and wait on 27L because the United flight wasn't ready to go yet while an Atlas 747 was on final for 14R. Once the United pilots radioed that they were ready, tower cleared them for takeoff on 27L, despite the fact that the Atlas 747 was touching down on 14R and was about to cross 27L on the roll-out. The Atlas flight did call out that he was on final, but that's the only indication I can see from the video that the United pilot has regarding the position of the Atlas flight. Judging from the below airport diagram, it appears that the ORD terminal would have been between the two aircraft at the time the United pilot was cleared for takeoff, so the aircraft wouldn't have been able to see each other until they approached the intersection. 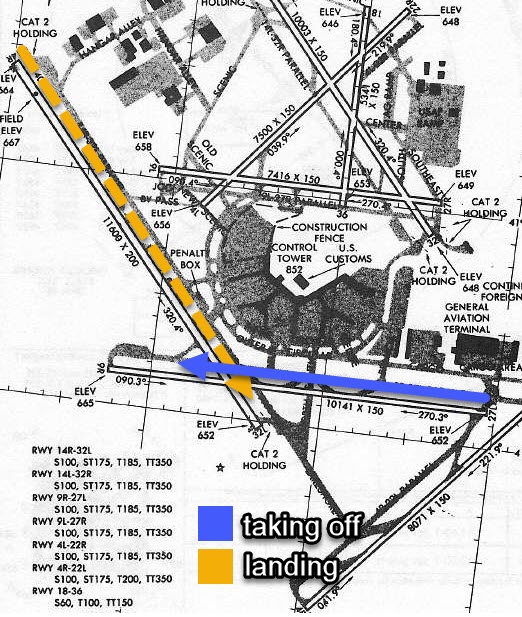 Obviously, the controller shouldn't have cleared the United flight for departure until Atlas was out of the way. However, given that he received the takeoff clearance from Tower, I'm wondering whether the United pilot would have had any other tools at his disposal to detect the position of the Atlas 747 and realize that the controller made a mistake (before he saw a giant 747 roll out in front of him on the runway and before the controller realized his mistake.) Specifically, do airline pilots have any additional means for determining the position of other aircraft on intersecting runways aside from relying on ATC, listening to the Tower frequency, and looking out the window?

I'm aware of TCAS for use in-flight, but I'm not familiar enough with it to know if it would help in an intersecting runway situation like this where both aircraft are on the ground.

safety separation intersecting-runways
Share
Improve this question
edited May 4 '17 at 0:19

As the question mentions, good situational awareness is an excellent safety tool. ATC is responsible for runway separation at towered airports, but pilots can play an important part of backup in the case of a human mistake.

The United pilots may or may not have been able to see the Atlas 747 on TCAS, as the terminal building that obstructed their view could also have blocked the transponder signal. TIS-B (Traffic Information Systems - Broadcast), a part of ADS-B, provides traffic both in the air and on the ground. ADS-B was not available in 1996, but if the same situation happened today and the United aircraft had an ADS-B signal on the surface and displayed TIS-B information, they would see the Atlas 747 on their displays. Whether or not that information would be useful to avoid an incursion in a cluttered runway environment is unclear.

The FAA is implementing a system to provide exactly the type of warning you're describing. Runway Status Lights (RWSL) use surface RADAR and lights embedded in the pavement to detect conflicts and alert pilots that a runway is unsafe to enter or take off from. In this situation, the United pilots would have seen red takeoff hold lights to inform them that the runway is unsafe for departure. The FAA plans to have RWSL operational in 17 airports, including Chicago O'Hare, by 2017.

Specifically, do airline pilots have any additional means for determining the position of other aircraft on intersecting runways aside from relying on ATC, listening to the Tower frequency, and looking out the window?

Basically the answer is no. The only thing that could have been of help is TCAS, however:

Some airports have Advance Surface Movement Guidance & Control Systems (A-SMGCS) that indicate whether runways and taxiways are safe to use. However only the highest level (A-SMGCS level 4: Conflict Resolution, Automatic Planning & Guidance) includes automatic guidance for the pilots, lower levels only provide guidance to controllers.

In the future ADS-B will be of help. In 2020 all commercial aircraft in the US will be equipped with ADS-B OUT. To display the traffic information in the cockpit, aircraft need to be equipped with ADS-B IN as well. As it stands, equipping with ADS-B IN is voluntary. Just like TCAS, ADS-B works line off sight. However, airports are likely to install re-transmitters at strategic points to overcome signal obstruction by buildings.

Not the answer you're looking for? Browse other questions tagged safety separation intersecting-runways or ask your own question.

65
Why does Chicago O'Hare have a penalty box?

8
Why is there no alarm when the transponder is turned off?
23
Was there an incident when Airbus autopilot wasn't letting the airplane land?
44
Who has the higher authority, the pilot in command or ATC?
23
Is it a flight violation to mishear ATC instructions for exiting the runway?
7
How could a wood and fabric aircraft be controlled after a fabric tear mid-flight?
1
What is the minimum separation for aircraft operating on or intersecting the same runway?
15
What level of information does a PIC have about a missile crossing their aircraft route?
2
What margin of error should one reasonably allow regarding aircraft performance?
13
Is there any obvious warning when auto-pilot is disengaged or when the mode changes?
3
Why would different crossing runways at one airport be on different radio frequencies?