When Boeing designed the 737NG, what factors influenced the change in the flap system?

The early Boeing 737 models had wings with triple-slotted flaps that appeared to be derived from the 727. When the 737 was redesigned as the Next Generation series (dash 600 through 900), these flaps were dropped in favor of a double-slotted design.

Why did Boeing choose to make this change, and what were the trade offs? Did it impact performance? I had always been under the impression that early 737s were reasonably capable on shorter and rougher runways.

One of the biggest differences that you will see between the flaps on the two is that the NG (photo on the right) has continuous span flaps while the classic has split inboard and outboard flaps. 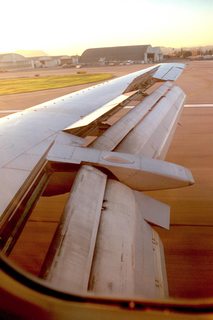 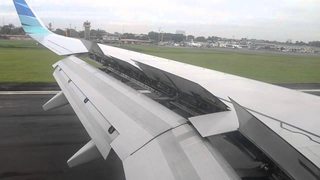 Combined with the longer wing on the NG, this gives the new flaps more surface area, so they don't need to be quite as effective. Overall, the NG actually has better performance than the classic, mainly because of the redesigned wing which is 25% larger and has winglets; both of which help out.

Even though the performance is better with comparable triple-slotted flaps, the double-slotted flaps are lighter (which helps with overall aircraft performance) and have fewer moving parts. This makes them more reliable and they require less maintenance. Most new aircraft designs are moving to either double or even single slotted flaps because of this simpler design and the fact that today's runways don't require the extra performance that would be gained by the more complicated flaps.

Not the answer you're looking for? Browse other questions tagged aerodynamics aircraft-design boeing-737 or ask your own question.

23
Would an aircraft with contra-rotating propellers longer than the plane's wingspan be able to fly?
9
How do the uninterrupted and interrupted flaps compare?
3
What are these parts on the wing of a Boeing 737?

16
Why were the 747SP's trailing-edge flaps so much different than those of the -100/-200?
3
Which radio altimeter is the Boeing 737NG call outs based on?
0
Which system on the 737NG decides the use of roll spoilers?
4
Why can't the 737 MAX's horizontal stabilizer autotrim be cut out by control yoke inputs?
5
When was the Speed Trim System implemented on the Boeing 737?
17
Why do the 737-100's JT8Ds, and no others, have suck-in doors?
17
Why didn’t Boeing ramp 737NG production back up in response to the 737 MAX groundings?
2
Can a 737NG still fly when every single electric run device/system is dead?
9
Are 737 pilots required to train in manual-reversion flight?
4
Can the Master Caution illuminate without the System Annunciator Panel on the 737NG?