What is the correct traffic pattern at a towered airport?

When flying into a towered airport in VFR, is the pilot expected to enter a standard traffic pattern, or should the plane be flown in the most direct route to final as practical?

For example, if westbound into a class D airport with a north-south runway landing on runway 18, should the pilot enter the pattern at a 45 midfield, fly parallel on downwind as usual, then start the descent normally when abeam the threshold, turning left base and final? Or should the pilot simply fly to the north of the field and start the descent and turn a left final approach?

The AIM 4-3-13 doesn't really explain towered airport operations, as far as how to enter the pattern. This is the most relevant explanation I can find:

When necessary, the tower controller will issue clearances or other information for aircraft to generally follow the desired flight path (traffic patterns) when flying in Class B, Class C, and Class D surface areas and the proper taxi routes when operating on the ground. If not otherwise authorized or directed by the tower, pilots of fixed-wing aircraft approaching to land must circle the airport to the left. However, in all instances, an appropriate clearance must be received from the tower before landing.

I've only flown into a few class D airports (only 3 months since I got my license), and wasn't sure about how to approach the field in certain situations. Some were straight in approaches, but a couple were generally as I described above. The tower usually says to report at 3 miles, or when turning to final. "When necessary" ATC will issue clearances for traffic patterns, but what to do if they just tell you are clear to land? Does "circle the airport to the left" mean do the full pattern procedure?

During flight training I never experienced anything other than pretty much a straight in approach to class D.

Edit: I found this explanation on a flight instruction website: "Pilots do not fly a standard traffic pattern at a towered airport, with a 45-degree entry to the downwind leg. Instead, aircraft enter the airport vicinity as instructed by ATC, reporting arrival on an assigned pattern leg and then accepting further instructions or a clearance to land."

This seems to contradict the AIM explanation. And again, what if ATC doesn't instruct anything, what are they expecting the pilot to do? A standard pattern or a straight in approach as direct as possible?

When flying into a towered airport, you will be given specific instructions, as per the ATC Handbook, Section 10, Arrival Procedures and Separation such as:

You can also request whatever you want, like: "Tower, Cessna 3-3-Lima, information bravo, requesting left base for 15"," and the controller will then evaluate your request and issue you instructions.

These instructions refer to the following diagram form the Pilots Handbook of Aeronautical Knowledge (PHAK, p. 13-12): 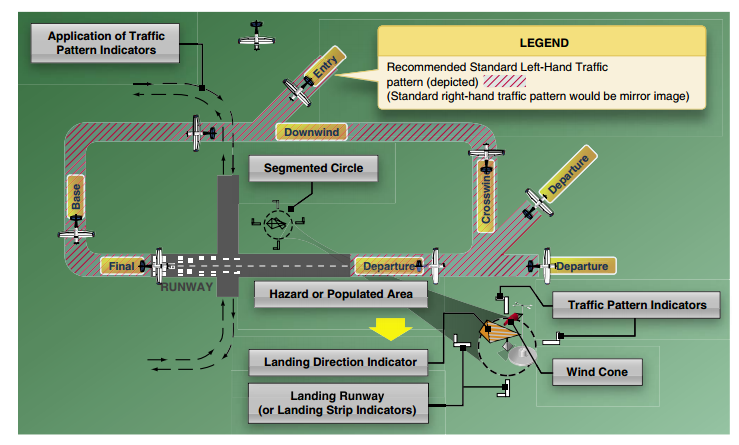 Traffic patterns are also covered in the Pilots Flying Handbook, Chapter 7, and states that:

When operating at an airport with an operating control tower, the pilot receives, by radio, a clearance to approach or depart, as well as pertinent information about the traffic pattern.

Which type of traffic pattern information ATC might give you, depends such factors as where you are relative to the airport, other traffic, noise abatement, obstructions, local procedure, etc. For example, in the diagram below:

If you are in contact with ATC, and don't know what you're expected to do, then key the mic and ask the controller.

(This is more from EASA regs, but FAA's should be identical)

Flying into class D airspace as VFR you are completely responsible for traffic separation. ATC will give you traffic information about other VFR and IFR flights, and traffic avoidance on request.

You need to be able to see other traffic and separate just as you would in uncontrolled airspace.

This tells me that , unless otherwise instructed , I need to fly as usual and enter an appropriate traffic pattern to give me ( and others ) the chance to maintain visual separation.

Not the answer you're looking for? Browse other questions tagged faa-regulations air-traffic-control general-aviation traffic-pattern or ask your own question.

19
What is a two- or three-mile base exactly?
6
When to turn base at towered airport?