Are there any aircraft with a nose wheel braking system?

I'm pretty sure that there are no aircraft equipped with a brake on its nose wheel, however two of my colleagues think there might have been. Are there?

Aircraft with retractable gear of course have devices to stop the wheels from spinning when retracted, but I'm asking about brakes used to stop or slow down the aircraft. Please don't consider aircraft with a tail wheel, gliders, experimental aircraft, or aircraft used for flight testing (certified aircraft only).

There are quite a few 727 that actually had nose wheel braking, however they utilized it only for maximum braking power. (Also they were proven to be ineffective and unreliable, so a service bulletin was written to remove the system).

Saab Gripens use nose wheel brakes to stop as well, the main gear sits farther aft than most planes, so there is quite a bit of weight on the nose gear, which makes it effective for stopping.

The Messerschmitt Me-262 had nose wheel braking as well. Back then, with the high landing speed of jets and no thrust reversers, the engineers wanted to give pilots as much stopping power as possible.

Here is a picture which shows the brake line running down to the wheel: 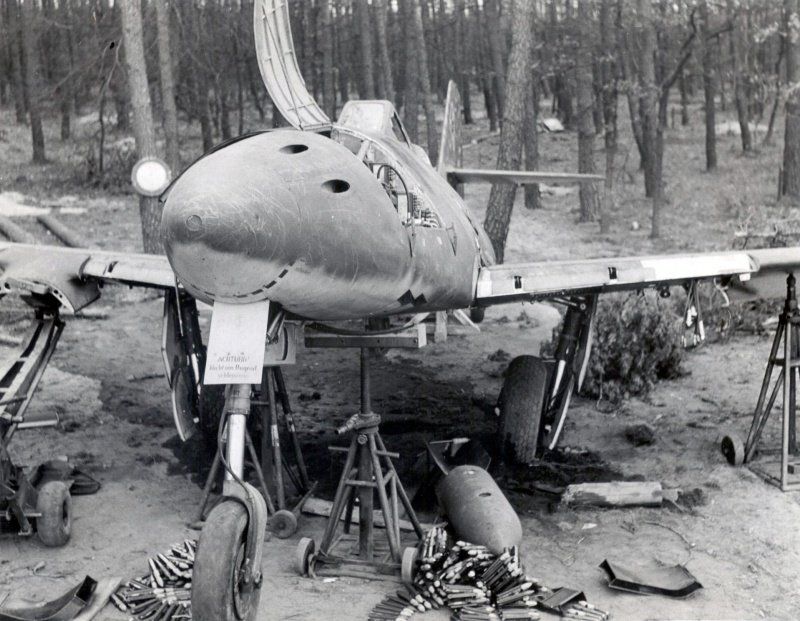 Abandoned Me-262 after the war (picture source)

Good question. With regards to mainstream commercial jets it might not do much and quite possibly be counter-productive.

Most (all?) Boeing and Airbus have about 95% of weight on the main landing gear (MLG), and thus the nose brake wouldn't be very heavily weighted, so not very effective. And for reasons of rotation, you don't want to load the nose very much, but rather have it pivot around the wings: where your lift is coming from.

You can then design the nose landing gear (NLG) to be quite light because it doesn't see a lot of load, nor take large braking reaction forces. And doesn't have any brakes/hydraulics etc. And the same with the fuselage strength: it's okay if the MLG take all the load: they are already in the "beefy" section of the plane, and there is no moment arm (torque) due to a big displacement from the centre-of-gravity (CG).

However if you started to have large forces on the NLG, you have it a long way from the CG, and thus a big moment: you'd need to take that into account when you designed the fuselage, making it stronger, and thus heavier. At the moment with no lift on the front fuselage section, nor any forces from braking, you can make it pretty light.

Having the MLG at the CG and also centre-of-lift from the wings (drag from spoilers) makes for a very stable system. Inherently stable too: the faster you go, the more drag from the wings, and thus more weight on the MLG, which they need.

I think this will be the case for all planes with propulsion from the wings: regardless if props or jets. If you have a prop on the nose it's a bit different because you need to beef that up anyways, so you don't mind the braking loads from a nose-wheel. But I don't see a lot of advantages for it. You add all the extra weight of the hydraulics and brakes, plus the weight from making a much stranger assembly. More complexity, more to service and go wrong.

Ahaha!! There IS in fact a non-ultralight aircraft out there that has its ONLY brake on the retractable nosewheel. That aircraft is the Verhees Delta. Uniquely, that aicraft has only two wheels (tandem, or bicycle undercarriage) and they are in line, one wheel at the front, retractable, and another, same size, 9 feet further aft, at the rear of the aircraft. There is a small bumper wheel at the tip of each wing.

The aircraft lands on the rear wheel - (the nose is very high, during landing as this is a delta wing aircraft). When it has slowed down enough the nosewheel leg makes contact with the runway and it can begin braking.

50+ B727-200 were equipped with nose brake systems. I have a B727 nose wheel cap with anti-skid. I have no idea what it is worth but it's a great conversation piece.

65
How are brakes cooled on heavy aircraft?
22
Why do some A380 main wheels have no brakes?
8
Does the 747-8 / A380 nose-wheel encounter more weight during braking?
4
Why don't nose landing gears have brakes?
2
Why do large civil airliners use cold rather than hot thrust reversers?

13
Why does an aircraft pitch up when the speed increases?
8
Is there anything wrong with this more symmetric aircraft design, and why isn't it used?
22
Why do some A380 main wheels have no brakes?
11
Is the MTOW determined by the wheel maximum supported weight?
2
In the old days, why didn't aircraft use simpler systems to land on a Carrier?
2
Does the parking brake provide additional deceleration in an abnormal situation?
18
Are there any aircraft with powered landing gear?
14
Are there any aircraft with a 4-wheel nose landing gear and a 16-wheel main landing gear?