How is a seaplane steered on water?

Steering a seaplane on water appears to be a little more 'interesting' than steering a land aircraft, at least according to the FAA Practical Test Standards for single-engine seaplanes (ASES), which requires the pilot to:

[use] flight controls, flaps, doors, water rudder, and power correctly so as to follow the desired course while sailing.

So how does it all work? Why/when/how do you use doors and flaps to steer? Are the water rudders connected to the pedals (like brakes on a land aircraft) or is there a separate steering control? What about braking: is there any, or do you just drift gradually to a stop?

Seaplanes mostly have water rudders that are used at lower speeds and are retractable (actually, they tilt out of the water flow). At higher speeds, like takeoff runs and landings, high speed taxis, they are retracted and the primary means of steering is the plane's rudder. Water rudders are connected to the regular rudder pedals.

Airlerons can also be used to steer a seaplane on the water by creating differential lift and drag (since most ailerons don't deflect symmetrically).

Doors can be used to steer by opening one or the other, creating drag on one side or the other. I have seen a C-150 pilot do this in the air, as well. Flaps, which create symmetrical drag, can be used to assist in slowing down but they're not useful for steering.

Seaplanes have no brakes other than the drag of the floats in the water, so a seaplane pilot won't approach a dock at a perpendicular angle. Instead, they will land along side a dock and then jump out onto a float and then to the dock, rope in hand.

Seaplane pilots also carry oars, which allow them, yes, to paddle, steer, and stop the plane.

So seaplane pilots have a number of tools at their disposal to steer the plane on the water. You can also read through the FAA Handbook for seaplane operations.

It does require some coordination!

In addition to steering a seaplane when under power, you can 'sail' a seaplane when the engine is shut down. All you need is air movement from wind or on a river from the current taking the aircraft downstream.

This is a good illustration: 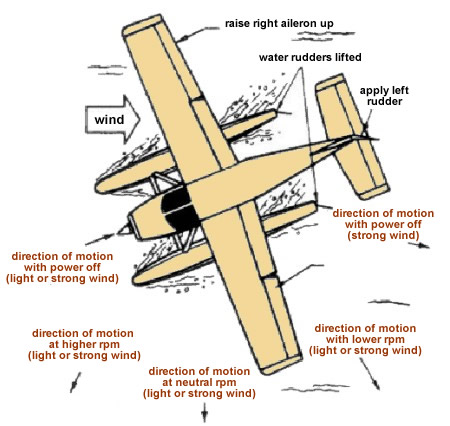 I don't think you'd want to approach a dock at a perpendicular angle doing this, but I used to often sail an old J-3 on floats to a perpendicular beaching (make sure the water rudder is up).

As an example let's say there is no wind, but you're on a river flowing west, and you want to reach the southern shore. The current is taking you downstream, so you have an effective west wind. When you shut down the engine, the aircraft will weathervane to face west. The rule of thumb is to use the air rudder and the ailerons to point the tail away from the bank you want to reach. Thus left rudder, left aileron down, right aileron up. You will move toward that bank of the river on the side which you have created the drag.

It's a lot of fun. You can also use this technique at idle power in a strong wind for more control as well as to get yourself out of trouble.

Hope I got this right, it's been 45 years since I've done it.

Not the answer you're looking for? Browse other questions tagged flight-controls taxiing seaplane or ask your own question.

11
Do seaplane have designated landing areas?
10
How are small airplanes steered on the ground if they don't have tillers?
7
How is the direction chosen when landing a seaplane on water?
7
Operating a floatplane/seaplane on water through a drawspan?
29
Is it possible to sail a seaplane?
9
Can I legally taxi a seaplane in a canal or channel?
7
Has there ever been a seaplane with retractable pontoons?
4
Can a seaplane make a long distance sea voyage on the sea?
26
How to slow down a seaplane on water?
1
What is this seaplane shown in this photo?