I heard once that fighter jet cabins are NOT pressurized, but the pilot's suit is, which prevents problems with decompression if the cabin gets shot.

But a military fighter pilot much later told me that the cabin is, in fact, pressurized and that getting shot (the cabin) and the resulting decompression are not that much of a bother, at all.

Therefore at higher altitudes, cabin pressure in a fighter jet is low enough that supplemental oxygen is required for the pilot(s). This is supplied via On-Board Oxygen Generation Systems.

By not pressurizing the cabin completely reduces stress on air frame and is beneficial during an unplanned decompression.

By the way, your friend (military fighter pilot) is correct.

The A7-E has an air-conditioning systems that maintains the cockpit environment at a specified temperature and pressure. The conditioned air enters the cockpit through a flow control valve and is distributed to vents around the canopy and window areas. The cabin pressure is maintained by a cockpit pressure regulator, which releases air into the nose cone of the aircraft to maintain the specified pressure as detailed in the graph shown below (A7E NATOPS Manual Section I - The Aircraft).

The cockpit altitude is displayed on a gauge on the forward console.

Regulations required pilots to be on oxygen from start-up to shut-down.

I volunteered to go ashore in Greece to be a liaison between NATO forces there and the USS Nimitz. They were concerned about US aircraft entering Greece airspace to conduct their scheduled missions, while Turkish fighters were also violating the same airspace. I was to be ferried in an S3.

I was in the back seat in the TACCO (tactical officer) position on the right-hand side. We had taken the catapult shot and were climbing out. I was talking with the crew member across from me in the SENSO (sensor operator) seat when he asked me how I felt. "Dizzy," I said. He pinched a fingernail and told me he was going to checkout the pilot and copilot. He came back and said they had lost cabin pressurization, and that we needed to put on our oxygen masks. I had been flying for so many years with the oxygen mask always strapped to my face that I never paid attention to the signs of hypoxia. It always amazed me all the various ways one could get in trouble airborne. 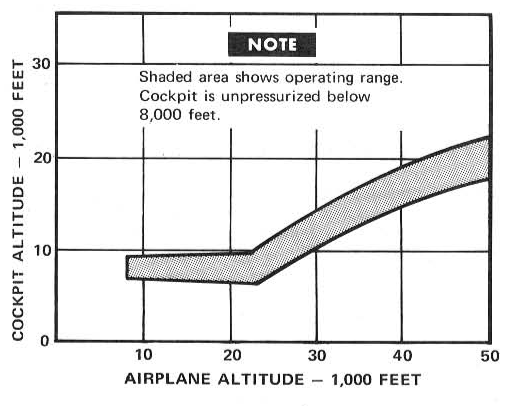 Yes they are. There are two pressures available to aircrew of fighters. One is a combat pressure for minimizing decompression if the cockpit is hit. The second is for ferry flights where a more comfortable pressure is maintained to reduce crew fatigue.

Pressurisation is required in fighter pilot because as per altitude increase pressure reduces so it is required to maintain the cabin pressure relative to ambient pressure...

Not the answer you're looking for? Browse other questions tagged military cabin-pressure or ask your own question.

0
Why do fighter jets pilots use an oxygen mask?
61
How do fighter pilots manage food, drink & toilet?
30
Is the F-16 cockpit pressurized?
4
Why are fighter jets rated differently than passenger jets?

20
Why do heavy bombers not carry air-to-air missiles?
25
What is an afterburner and how long can a jet fly on afterburner?
1
What areas of a commercial airliner are pressurized besides the cabin?
9
Are there any pressurized piston-engine aircraft?
6
Are pressurized passenger aircraft usually completely airtight?
7
Why aren't aircraft cabins pressurized to sea level pressure?
30
Is the F-16 cockpit pressurized?
10
How are turboprops and other propeller planes pressurized?
3
How would tiltwing aircraft pressurize their cabins?