How does the design of the ailerons affect the roll-rate of the airplane?

The roll rate is the speed at which a plane can complete a roll. This depends on a number of factors, including aileron size, maximum aileron deflection, wing length, and speed.

Ailerons that can deflect a lot of air without disrupting the airflow over the wing too much are desirable in an aerobatic plane, so the roll rate can be increased and so the plane will have better roll control at lower speeds. While larger ailerons are desirable on an aerobatic plane, they are also more susceptible to flutter at high speeds, which is not desirable because it tends to rip them off the wing. There are several design techniques that can be used to mitigate this, such as gap seals, counterweights, countersurfaces, etc.

One of the distinctive feature often found on aerobatics aircraft ailerons are spades. They are an efficient form of aerodynamic counterbalance that serve to reduce the effort needed on the stick to actuate the aileron.

They also serve to bring the centre of mass of the aileron forward of the hinge line in order to help prevent control surface flutter. 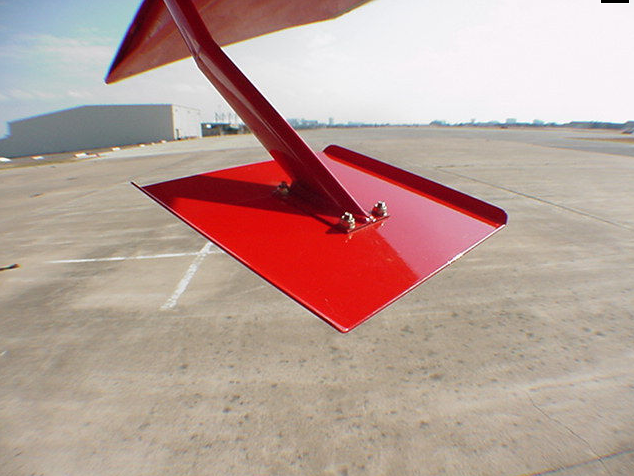 I asked Patty Wagstaff at Oshkosh one summer how she was a able to get the airplane to flip tail over nose - I couldn't envision a set of control movements that would make that happen. She told me the plane was balanced on knife edge and that's what allowed it to be moved the way it was. The spades mentioned above help provide the light control forces to allow the control surfaces to make the large movements.

18
Why does the yoke "stick" in a turning position?
4
What classes of aircraft require hydraulic flight controls?

33
How does the mounting location of a jet engine affect aircraft performance?
16
What is the significance of the speed of sound to aerodynamics and aircraft design?
33
Are there full scale helicopters capable of sustaining inverted flight?
3
How I determine numerically the roll rate of an aircraft?
1
What is the 'end plate' effect?
2
What is the best design to stack wings of a triplane?
3
In the US, would it ever be legal to fly a loop in any airplane or glider that was operating in the "utility" rather than "acrobatic" category?
1
What differentiates the entry procedures for spins and snap rolls?